When four big chickens see a wolf sneaking near their coop, they run into the woods to hide. But for a bunch of big chickens, running away from danger isn’t as easy as it looks. As they continue on their way, they wonder: What if they get stuck in a ditch? What if they hit an iceberg in the lake? What if they step into a cow patty? Eewww!

The four big chickens who are afraid of everything are now feeling all cooped up, so they set off to find the farmhouse. Where is it? the hapless hens wonder. First they find a doghouse, then they run into a tractor, and then they stomp into the barn. Who knew the farmhouse was right under their beaks the whole time?

Biggie Bear lives in a quiet corner of a busy little town. He collects stamps, plays jazz, and enjoys being by himself. One day, the town soccer team knocks on his door, and they need BIG help. Biggie’s never played soccer before, and once they are out on the fi eld, Biggie realizes that maybe there is more to soccer than just being big. Country Mouse and the City Mouse by Carl Sommer

City Mouse turns up his nose at the Country Mouse’s simple home and plain food. Back at his house in the city, he treats his country cousin to a soft bed, beautiful gardens, and a buffet of delicious things to eat. Country Mouse is greatly impressed with City Mouse’s riches until he meets a cat and nearly loses his life in a mousetrap.
City Mouse might have a beautiful home with fancy trappings, but Country Mouse prefers his own home where he has a cozy bed, healthy food, and a safe, peaceful life. Join Country Mouse and City Mouse in this modern-day retelling of a classic Aesop fable, to learn that peace and safety are more valuable than material possessions.

Another Important Book is an invitation to celebrate toddlerhood. Turn the pages to celebrate exactly what’s so important about some of the most important ages of a child’s life. This is the never-before-published companion to one of Margaret Wise Brown’s most beloved children’s books of all time, The Important Book.

Inch by Inch by Leo Lionni

In this classic book, a winsome, winning inchworm is proud of his ability to measure anything under the sun. Ramon loved to draw. Anytime. Anything. Anywhere. Drawing is what Ramon does. It¹s what makes him happy. But in one split second, all that changes. A single reckless remark by Ramon’s older brother, Leon, turns Ramon’s carefree sketches into joyless struggles. Luckily for Ramon, though, his little sister, Marisol, sees the world differently. She opens his eyes to something a lot more valuable than getting things just “right.” In this, the second Little Miss Spider adventure, the adorable tiny spider is preparing for her first day at Sunny Patch School. Full of excitement and anticipation, she tries hard to, but just can’t, mater her new lessons. In the end, however, she discovers that her true talent is kindness. Now, in a special mini-book format, the menagerie of new school friends and the ever sparkling, simple rhymes of David Kirk’s lilting tale will delight children who are both nervous and excited for their own first day of school.

The kids in Room 207 were misbehaving again. Spitballs stuck to the ceiling. Paper planes whizzing through the air. They were the worst-behaved class in the whole school. The students don’t proffer a shred of respect for their good-natured teacher Miss Nelson, but when the witchy substitute Miss Viola Swamp appears on the scene, they start to regret their own wicked ways.

Deep in the sea there lives a happy school of little fish. Their watery world is full of wonders, but there is also danger, and the little fish are afraid to come out of hiding . . . until Swimmy comes along. Swimmy shows his friends how—with ingenuity and team work—they can overcome any danger. 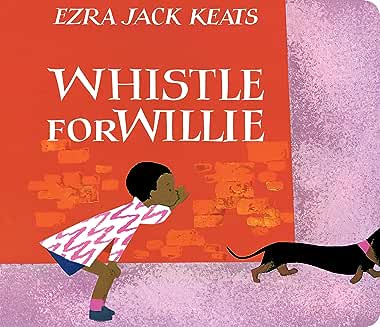 This book is about a little boy, name Peter. When he saw a boy whistling to call his dog, Peter decides to whistle to call his dog, Willie. He tries and tries to learn how to whistle. He practiced every day and in varieties of ways. He kept trying until he was able to whistle. His dog, Willie, looks around to see who is whistling and calling him. Peter becomes so happy with himself and for what he was able to do, that when he went on an errand to the grocery store, he whistled all the way there and all the way back home.