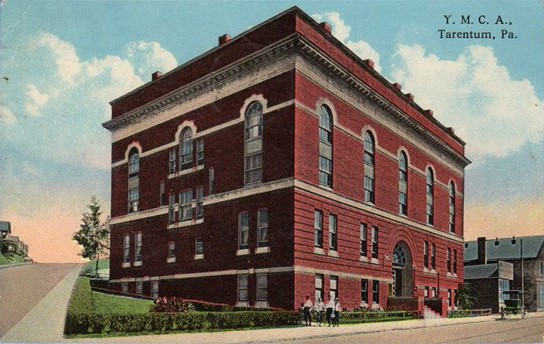 The Y.M.C.A. was built in 1900 and opened in 1901 with money donated by Captain John Baptiste Ford the “Father of the Plate Glass Industry.” (later PPG Industries) He had this building built with the stipulation that there would always be a library in it for the citizens of Tarentum, on the second floor.

The first library organized in Tarentum was located in the Tarentum Y.M.C.A., which opened in 1901. The collection of books was small and was located in what they called the “Reading Room.” This lasted for a few years, and money ran short and the reading room had to close. 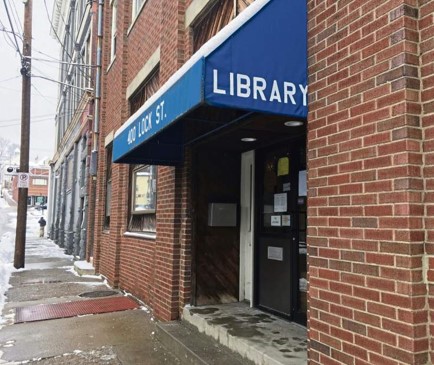 The Tarentum Presbyterian Church donated over two hundred books from their library to the new Tarentum Public Library.

With much help from concerned citizens and donations from all the local business people the library was ready to open. It was organized as a state library in 1923 and the Grand Opening of the new library, known as the “TARENTUM PUBLIC LIBRARY” was officially opened on January 12, 1924.

The people of Tarentum were so excited to have a library in town. Caroline Lauman was appointed as the first librarian. She was from Pittsburgh and a graduate of Drexel Library School and had a lot of experience working in libraries.

Caroline Lauman later moved on to take a job at the Sewickley Library in 1926. Dr. A.F. “Daddy” Walker had just retired from Tarentum High School as a teacher and he was elected the new librarian at the Tarentum Library, after taking a six week course at State College designed especially for librarians. The library was expected to grow rapidly with the experience of Dr. Walker and his love for books and the community. Dr. Walker held this position until his death in October 1940. He was succeeded by Miss Blanche Armstrong until 1943. In 1943 the library moved from the Y.M.C.A. to the First Ward Grade School on Ninth Avenue. At this time Mrs. Frances Dixon Mardorf was elected librarian. You would enter the library from Lawton Street.

In 1958 an enthusiastic Tarentum Council member, Ed McCormick started a fund drive for the library, and a $60,000.00 contribution from the Walchar Estate provided funds for the library to purchase a home of their own. They purchased the SMITH Building (later RUDERTS) on East Sixth Avenue. This purchase was made on November 15, 1960. The librarian in the new library was Mrs. Margaret Nealer. Mrs. Nealer resigned in 1962 and Mrs. Clair Danner accepted the position. 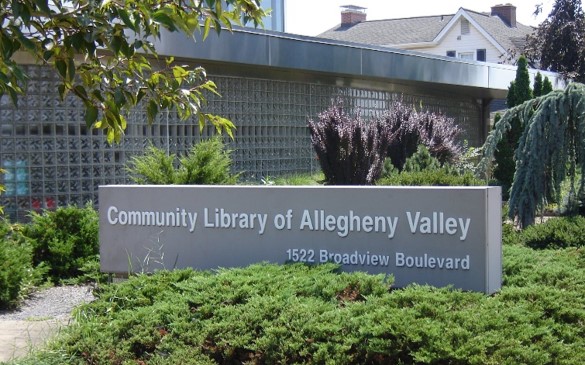 In 2004 the SMITH Building needed many repairs and the library could not afford this, so they started looking for a new library. They found the old post office on the corner of Lock Street and Fourth Avenue. They are still renting this building today.

There have been many librarians over the years including Mrs. Whitlatch, Carol Thickey, and Miss Pat Mardorf.

In October 1998 the Tarentum Library opened a new branch in Natrona Heights, Pennsylvania. It was built on the property where Dr. Clark Rollins had his home on Broadview Boulevard.

The Tarentum Public was officially changed to the Community Library of Allegheny Valley in the late 1950’s.

The Tarentum Branch of the library was closed on February 26, 2020. The local history resources were moved to the Harrison Library location.

On December 4, 2021, Kathy Firestone retired as the director of the library after 29 years of years.

The current director of the library is Suzy Ruskin.

By: Cindy Homburg, Board of Directors – Community Library of Allegheny Valley